A Time Lapse of the 2019 Mercury Transit

A transit of Mercury across the Sun takes place when the planet Mercury passes directly between the Sun and a superior planet like the Earth, becoming visible against the solar disk. While not as rare as a Venusian Transit these are stil rare events only taking place a few times every century.

NEVER look at the Sun through a telescope, an instant looking at the Sun can destroy your eyesight for life.

Even though there was a lot of cloud in the UK during the 2019 Mercury Transit, there was enough breaks in the cloud to make this time lapse of Mercury's progress across the Sun before it went below the horizon. Using a Solar Filter of course! 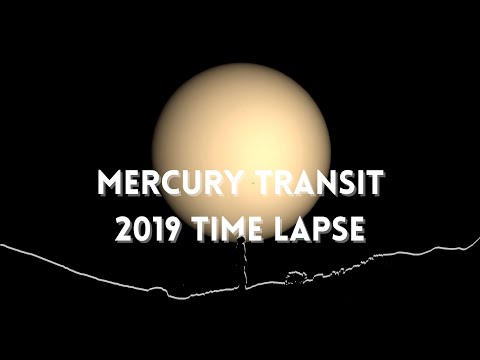 What equipment do you need to see Mercury Transit?

The first thing you need is the correct time. Mercury Transit only happens at certain times over the century the only other thing you need is a Solar Filter for your telescope and optionally an astronomical camera.

Using a Solar Filter allows a normal telescope to be transformed into a white light solar telescope allowing the Sun to be viewed and captured without any other specialized equipment.